So we didn't go to the party. Theo and I stayed behind and let the ladies go. So I read Theo all that I've written thus far. He got into it, listening attentively, and actually remembering to come back after a pee break! The story triggered a few memories from the hospital which we discussed. And reminisced about the happy juice. I was reading the portion when I previously asked him if it was all worth it. He quickly interjected with the still current answer of NO. And that told me it was time to get out of the house. The sun was calling and the cool afternoon breeze asked us to join it (one of the benefits of Southern California living). So we grabbed our card game and took a walk to Starbucks for a coffee and a chocolate milk - one of our neighborhood doings. Here, Theo smiled. Here, he did his winning dance and did some air karate punches. When I won, he slyly pretended he did instead. He was finally in a place to get lost in the moment. He still can't raise his head up and looks up only with his eyes. He still can't open or stretch his mouth bigger than what it takes to do a medium sized smile. But, it was good to get outside. Good to walk and joke and get competitive over some friendly games of TAKI, if only for the sake of it's what we do when all is normal. And in moments such as this, normal is special.
On the way back home, after still not eating a real nutritious meal since the surgery, only bits here and there, he said to me he wished he could go to Randy's Donuts. Now, those of you familiar with LA know what and where Randy's is. And those of you familiar with the Progress Reports have recently seen an installment photographed there. Those of you who have seen the movie Ironman II (and numerous other movies) are familiar with the scene Ironman sits inside the big donut. Well, we saw this movie a few months back and afterwards I mentioned that the big donut from is near the airport and one day I would take him. That one day became that moment, and a memory was established  to look forward to again in the future. One of those dad and son things. So something triggered that memory on our walk back from Starbucks and of course inside my head, I'm already planning the trip. But, I do the adult, responsible thing and say that when we get home, if he eats a decent enough dinner, we'll go. The promise was exchanged. He did and off we went. And now we're back and in Theo's words, "it was sooo worth it!" (still in a cute froggy voice). We both went with the classic chocolate glazed and it just melted in our mouths as soon as it entered. This is certainly not the best donut in the world. Some purists out there have their place of choice. But, for us two (and mom and safta who got a to go order), this was the best donut at the best time ever! We stuck around for Theo to indulge me with a few polaroids (keep your eyes open for next Progress Report). An iphone photo (see below) and back home. Quiet drive back listening to Bill Withers until I lower the volume to hear Theo say, "we're satisfied." When we got home and shared our to go bags with Orit and Safta, Theo wanted another bite. One big bite, where his mouth opened wider than it's been in 5 days. And then a smile came along with the realization that he's one step closer to full recovery. I call that Randy's therapy. 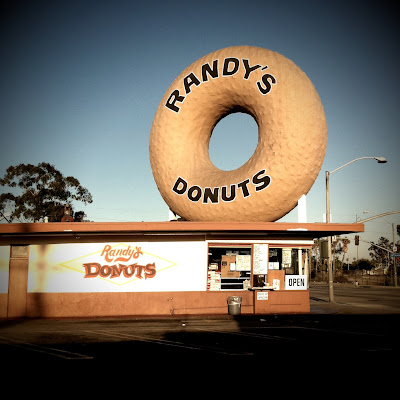